In the middle of a worldwide pandemic, we decided it was a good idea to buy a house.

We had been looking at houses for a little while before the pandemic, but it was more like window shopping to give us something to do in our free time instead of scrolling endlessly through Instagram. It started as a little game of looking at beautiful multi-million dollar mansions and guessing at what the price would be. Eventually, we started getting curious as to what type of homes we could afford.

Now, I used to live in Vancouver, and my expectations for the ratio of the house to cost were very very high. I’m used to seeing smaller, teardown houses listed for 1 million-plus. Here in Ottawa however, the house to cost ratio was much more reasonable. For instance, a detached suburban home usually goes for around $550-600k depending on the neighborhood and the age. Even though the prices were lower, Ottawa still has a bidding war problem, so it’s rare to see a house go for the listed price, let alone below asking. However seeing that I could afford something other than a 650ft² condo, the hunt was on.

COVID hit Ottawa in March of 2020, and very quickly we were all put under quarantine. My office was closed on March 20th and the work from home life began. Thankfully I was renting a 2 bedroom apartment in a nice neighborhood just outside of downtown and I had the second bedroom set up as my music studio, which made the transition to working from home very easy. The downside in that, however, was that after sitting at that desk for the whole day, I was not so eager to continue sitting there to work on my personal projects or music. 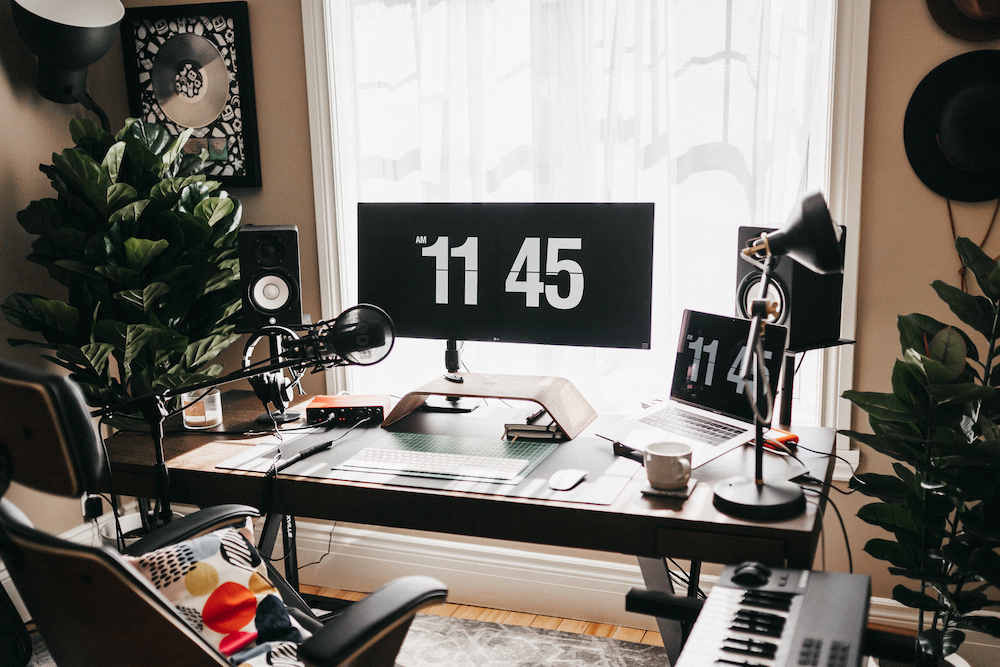 My home studio at the apartment on Holmwood

My personal creative endeavors took a backseat, and I was finding myself falling into the quarantine blues. The apartment started to feel a lot smaller, and the neighborhood that was once perfect for socializing and going out for food + drinks became more of a burden for a more subdued and quiet lifestyle. I found myself browsing realtor.ca instead of Instagram or Twitter, and my window shopping was becoming more serious. We drove by some listings, checked out neighborhoods, and started diving into the numbers of what was affordable.

Fast forward to April, and I saw a house pop up that fell into our requirements, but it had a date for all offers to be in by the next day at 5:00. Not a lot of time for me to get all my ducks in a row. I decided to ignore it, even if it was almost perfect for what we were looking for. A couple of days later, I came across the listing again, however this time the condition about all offers being in by a certain date was gone. Interesting. I reached out to my mortgage broker and confirmed that the house was within my approval range, and quickly booked an appointment via my real estate agent.

The viewing was brief since we had already spent hours upon hours going through the virtual tour, even to the point where we had a sense of deja vu as soon as we stepped into the house. The house had no other offers and little interest seeing as though the pandemic had now been ongoing for longer than a month. The market was slowing down with more people hesitant to purchase anything because of the uncertain circumstances we were all faced with. We went back and forth for a while negotiating the terms of the deal, but once all was said and done, we ended up firming the deal below asking and with a 6 month out closing date.

That was a lot of time to plan.

The main selling point of the house for us was the kitchen. We looked at countless listings of beautiful houses with every other box checked, but the kitchens would all need some sort of renovations to make it ours. This kitchen was the exception. 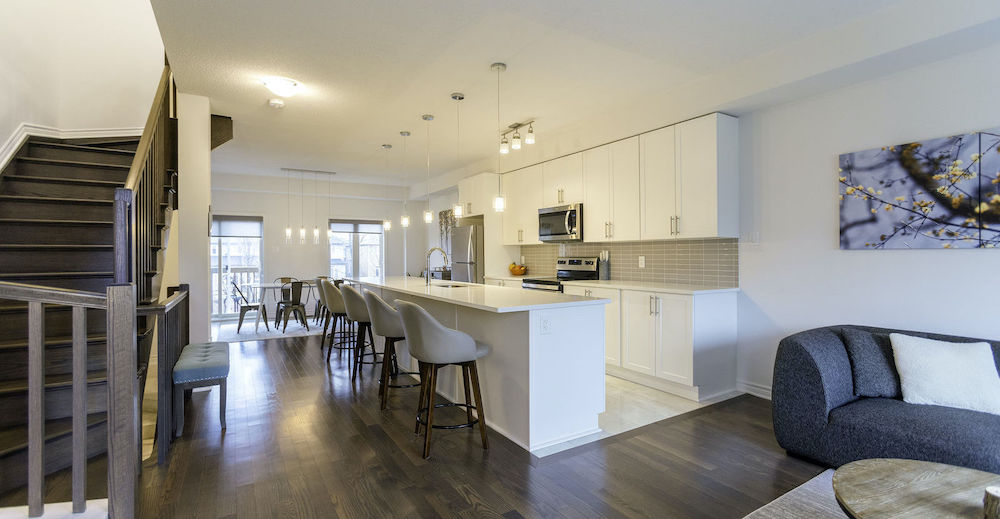 The kitchen as showed in the listing

The kitchen island is unnecessarily big, standing at 14ft long, it’s going to be perfect for entertaining friends and family. Structurally, everything else in the home was exactly what we were looking for, so no major work needed to be done. The only stuff that we wanted to change was the overall aesthetics and color palette. The previous owners had a white and silver palette, with light fixtures that were appropriately named champagne lights. It was a little too high class for our tastes and so began the process of curating a moodboard and plans for the kitchen.

After defining the general direction for the kitchen look and feel, I started making a to-scale 3D model so we could start exploring fixtures, colors, and trims. Thankfully the virtual tour program allowed you to measure things in the program, so it made the modeling easy. 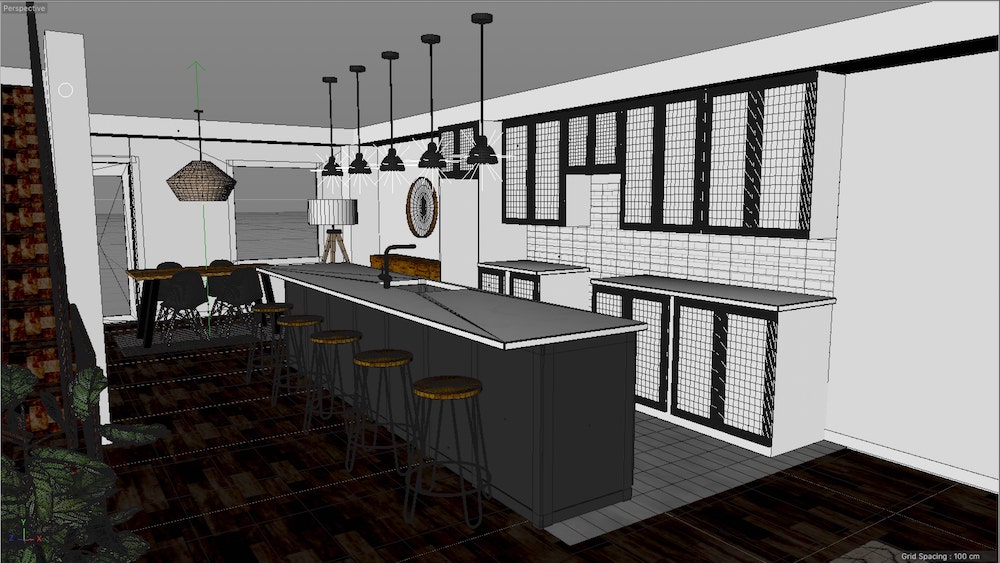 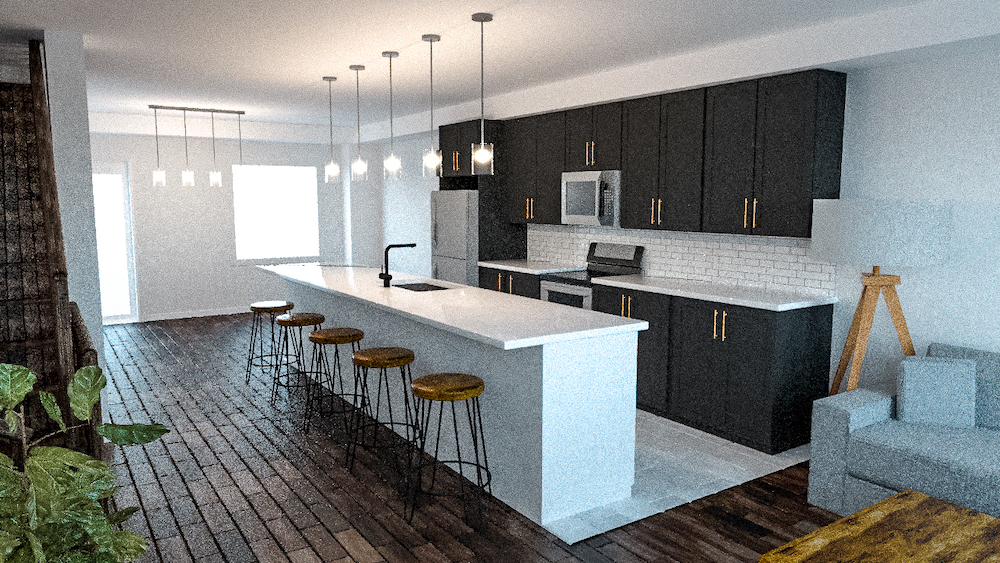 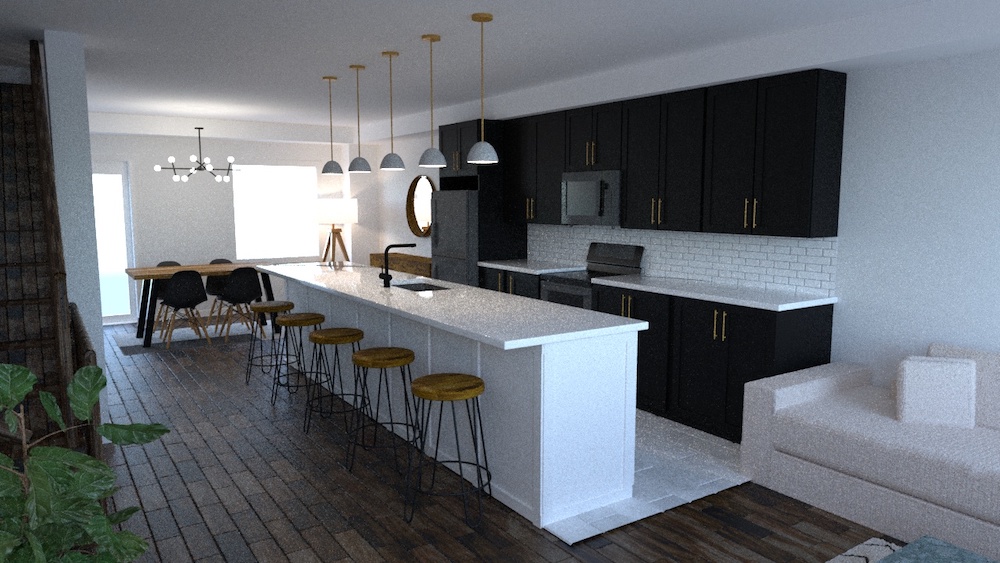 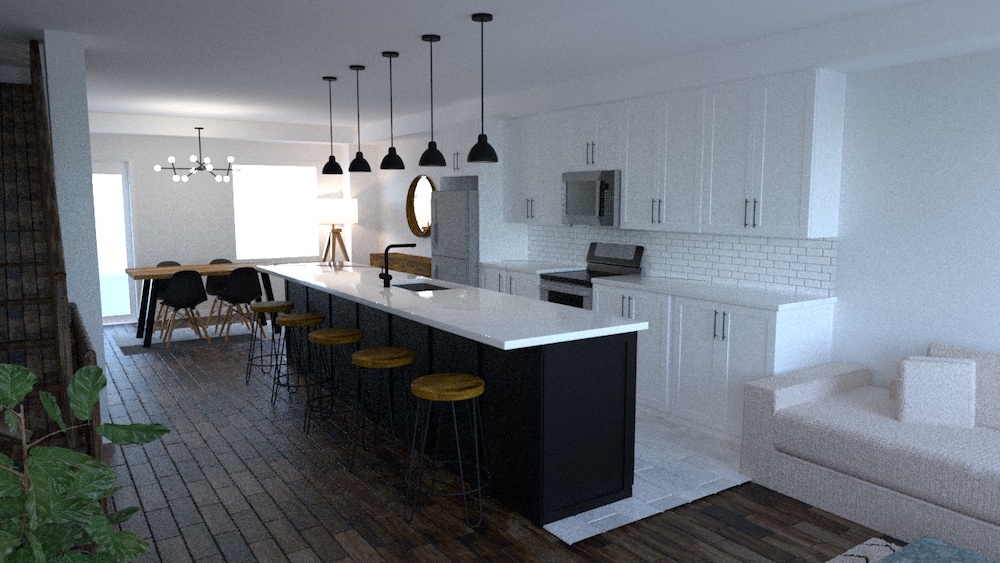 We decided that we were going to change the backsplash from grey to white, swap the silver faucet for a new black one, and change out the pendant lighting. The original plan for colors was to make the cabinets along the wall all black with gold handles and keep the island white with black handles. The difficult thing about that was trying to find some light fixtures that didn’t blend into the black wall of cabinets. We also decided that we were going to replace the quarter round trim along the island with a wider board and batten style to match the edges of the cabinet doors. I explored what it would look like with the island only being black, and the wall cabinets staying white, explored various light pendants, and constantly was changing handle colors.

The deciding factor for the lighting was that the lighter pendant shades were over $200 apiece, vs. the $15 Ikea ones. Since we needed 5 of them, we weren’t about to spend $1000 on some island pendants. With the designs finalized, we started getting the materials, buying paint, and patiently waited for the day we got the keys and could start working away before we moved in.

September 10th rolled around and the house was finally ours, we got to work right away cleaning it from top to bottom. On September 12th, we got working on the Renos, painting cabinet doors, started work on replacing the trim, and changing the backsplash color. It took more time than anticipated because of the 12 hour drying time on the cabinet paint but we finished up by the end of the 14th after moving all our furniture in.

I’m in love with the way it turned out. The island is such a statement piece and the black brings the attention to it as the center point of the kitchen. The black handles on the white cabinets help tie the two sides of the kitchen together, and the black pendants are such a sharp contrast to the rest of the space. 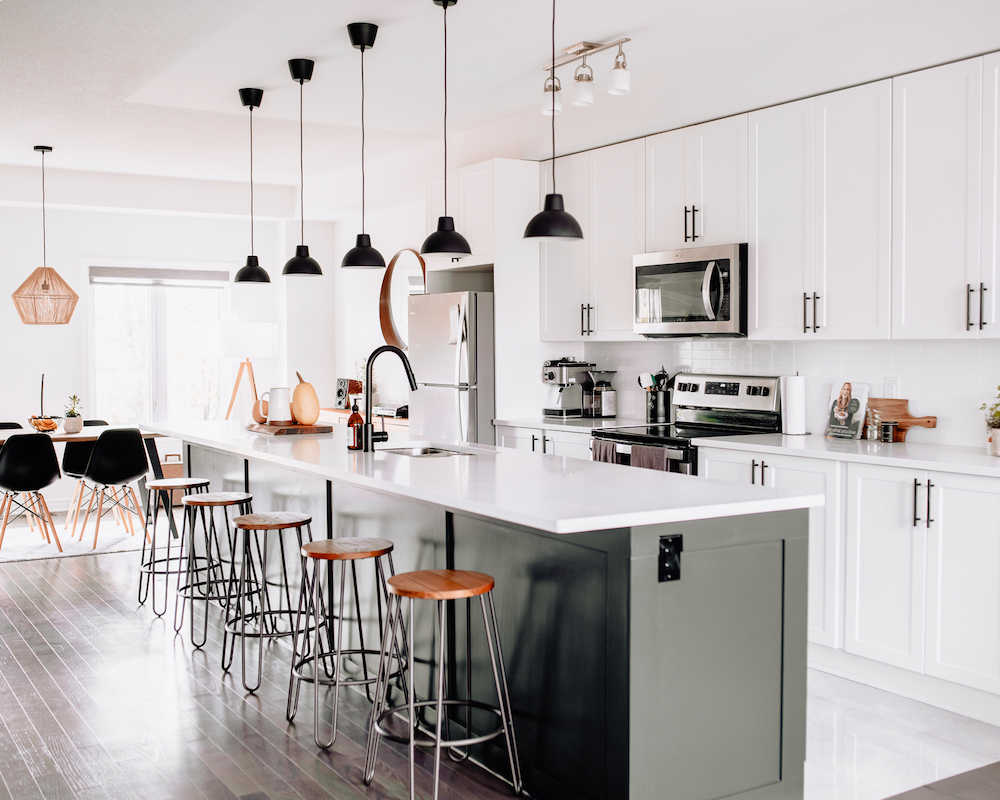 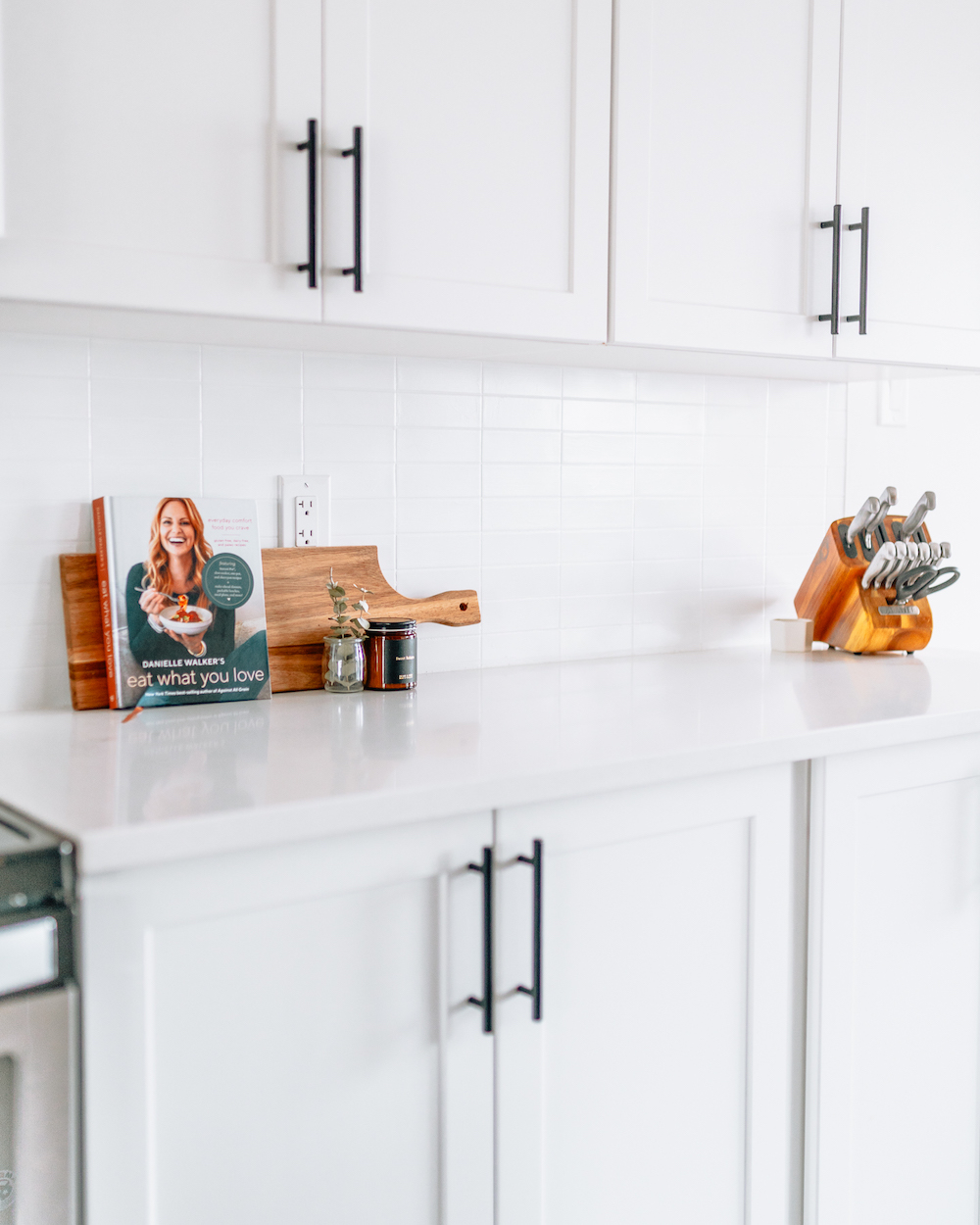 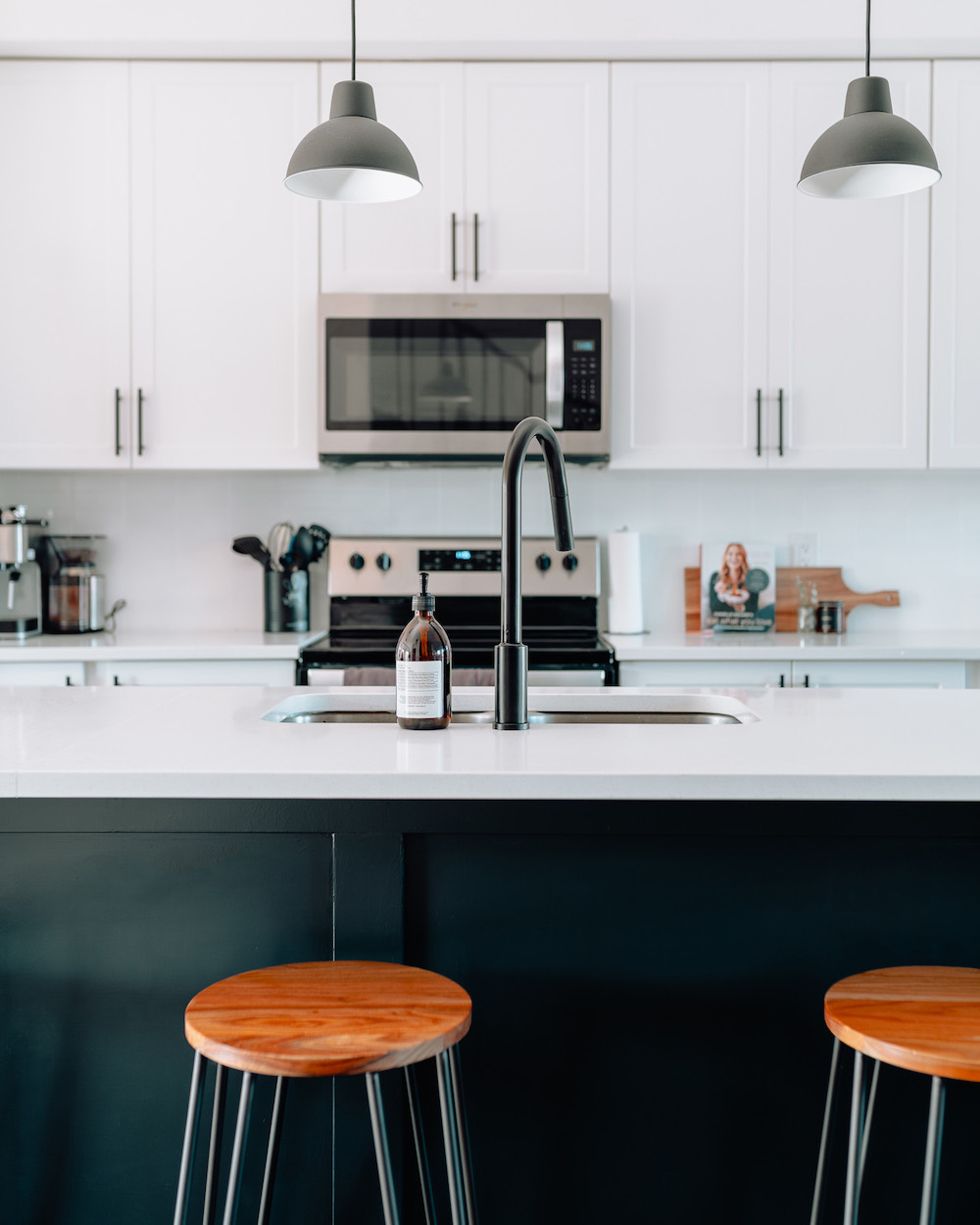 The gold handles paired with the black cabinets works wonderfully. 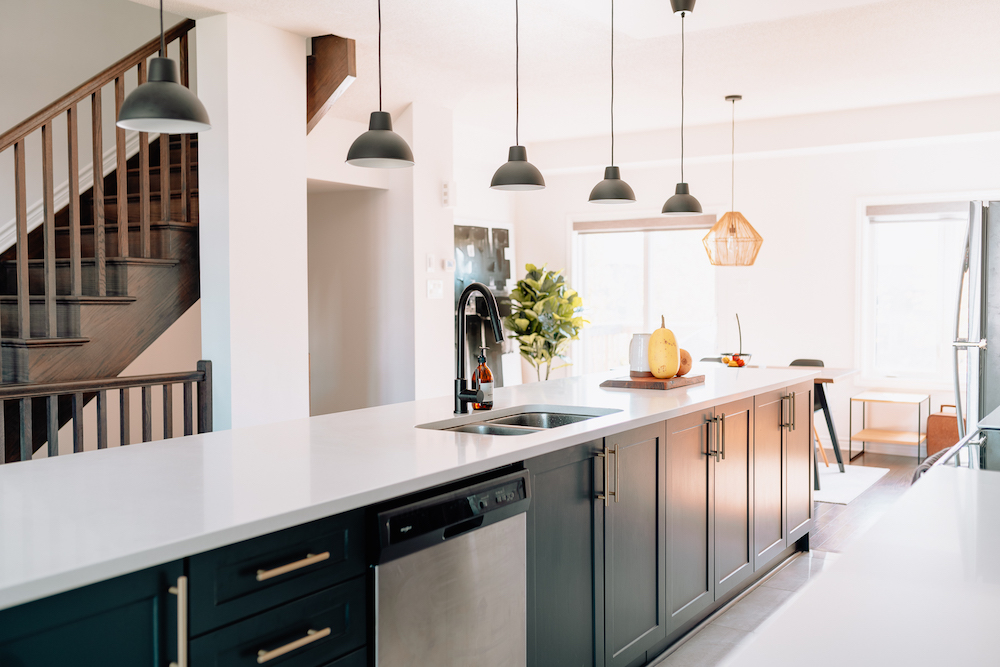 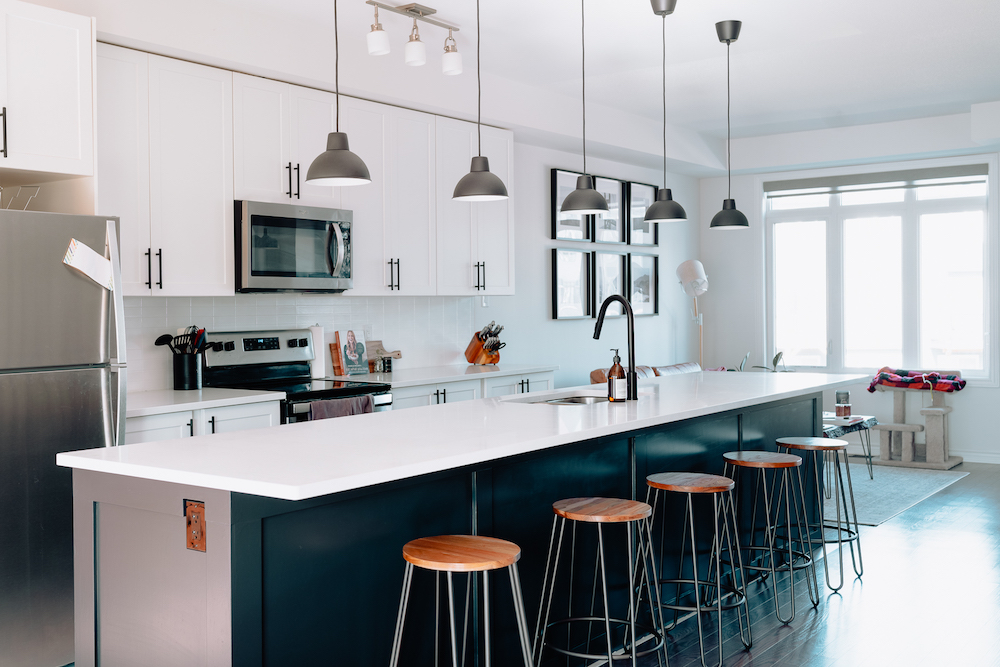 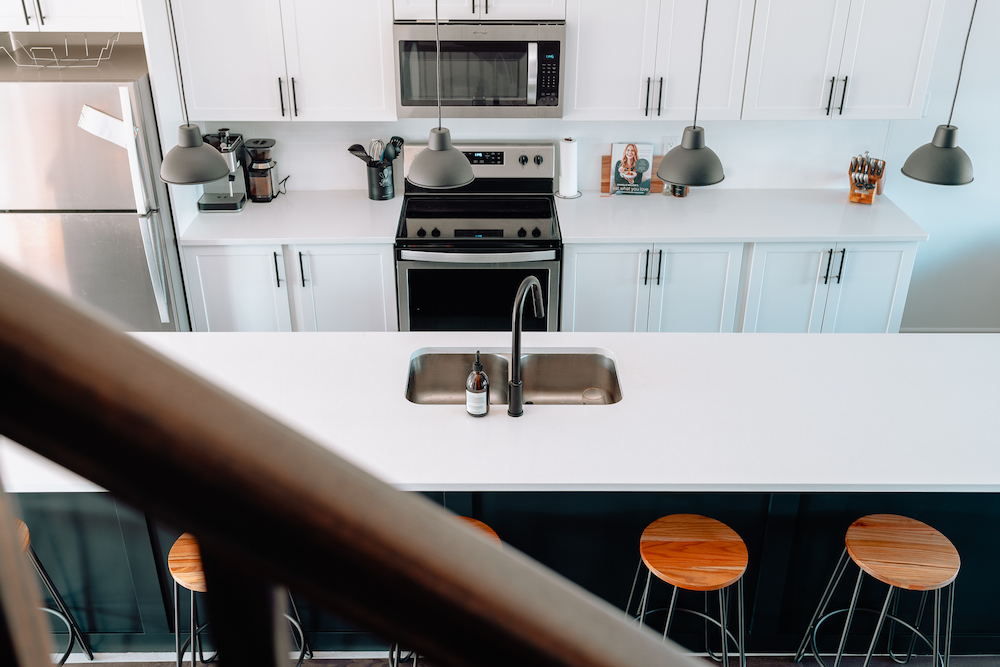 With the kitchen fully complete, the next few things are putting up the homemade shelves that wrap the fireplace in the living room, waiting for the new couch delivery, and starting work on the built-in bookcase in the dining room.

Follow along on my journey of making this house, a home